I miss the Tokyo skyline (and other images of Japan)

Exactly a year ago I was in Japan. I visited some amazing places, saw some amazing sights and took a ridiculous number of pictures. I managed to edit them down to 358 at the time, but that's rather more than most sane people were willing to look at (although bonus points for those who humoured me). Anyway, a year on, here's some of my favourite pictures and memories from my trip to another world.


My first day in Tokyo - tourists taking pictures of cats sitting in a cherry tree in Ueno Park. I knew I had arrived in Japan.


Gardens next to Ginza


View of Mount Fuji from the shinkensen (bullet train)


Cat cafe - definitely the strangest experience of my time in Japan, not least because sadomasochistic Japanese cats seem to prefer being slapped to stroked


Children's Peace Monument, Hiroshima. The statue features, Sadoko, who died from radiation poisoning following the atomic bomb, together with a crane representing the thousands of cranes she and others folded to call for peace


Music shopping - I bought the new album by The London Suede


Bowie cafe in the Sony building


Feeling a bit of out of place (like Bill Murray) in the New York Bar, Park Hyatt Hotel


The cherry blossom came early for me

If you still want more, the full collection is on flickr!
Posted by Jenny at 18:07 0 comments

So yes, I know this 'Blue Monday' thing is a load of gubbins (although being woken at 3am by my carbon monoxide alarm, loudly demanding I change its batteries, I did start to wonder), but... I do like the blue-hued photo series I took many moons ago. And I also like quite a lot of songs which feature the word blue. So I decided there was a blog post in that... Let's face it, that's as much of a good reason for it to be Blue Monday as anyone else has come up with.

(If you haven't already, read part 1)

5. The Reflektors/Arcade Fire - Empress Ballroom, Blackpool 27/11/13
It's not very often I feel underdressed at a gig (I'm a Manics fan, after all) but, following instruction from the band, we were greeted by a queue of the most spectacular gig outfits I've ever seen. And once inside the perfectly suited Empress Ballroom, it felt like we were in the masked ball scene of Labyrinth. I don't even own an Arcade Fire album, but was completely won over by the spectacle and the spectacular sound they created too. It wasn't so much a gig as a huge party... If I was in a band, I'd want it to be Arcade Fire.

4. Conor Oberst - Barbican, London 4/2/13
It's a rare thing to see Mr Oberst in the UK, so traveling to London and staying in a windowless room was a small price to pay. Being able to have pre-gig Dauphinoise potatoes and white wine in the Barbican canteen improved matters, then Conor played us a stripped down set of loveliness. The 'Waste of Paint' finale was just.......no words.

3. St Os Fest - Newcastle University 11/1/13
Definitely the most I have laughed at a gig, ever. Which I'm hoping was the point. The Chapman Family doing Kiss were obviously my highlight, although Frankie's Ziggy Stardust and the Bowie/Queen (Futureheads) duet of Under Pressure was actually genuinely brilliant. And if all that wasn't enough, it was all for a great cause too, with all proceeds going to St Oswald's Hospice.

2. Manic Street Preachers - The Ritz, Manchester 27/9/13
So I didn't think my most-watched band ever could still surprise me. Yes, their live shows are rarely a disappointment and I never fail to get shivers of anticipation as they walk on stage... but this was something else. The crowd reaction to opener Motorcycle Emptiness was like nothing I've ever experienced before. Maybe it was the fact it was a small venue that sold out in seconds, maybe it was The Ritz's famous sprung dancefloor... I don't know, but that first song set the tone for a rapturous night.

1. The Chapman Family - Georgian Theatre, Stockton 26/7/13
It was pre-ordained that this one would be emotional as, a week earlier, The Chapman Family had announced it would be their last ever gig. To be honest, the details are lost in a blur of glitter balls, red velvet, feedback, dancing, vitriol and balloons. Contrary and beautiful to the last.

Anyone who even knows me a little bit, will also know that I love a good countdown. Having just completed this year's Festive 50 list of my favourite Christmas songs on Facebook, I've overcome the withdrawal by trying to decide my top gigs of the year.

Last year, I only managed a top four. This year, I've either become a lot more indecisive, or been to a lot more gigs, or the quality has just gone up a notch. I've mustered up an entire top 10 of musical loveliness for you. So here it is - not necessarily the 10 best gigs I saw this year, but definitely the most memorable. Just to add to the tension, I'll split it into two posts, so here's number 10 down to number 6...

10. Slow Club - Pop Recs Ltd, Sunderland 31/8/13
One of my absolute faves playing new songs at a shop I'd been wanting to visit for ages - that seemed reason enough to make the six hour round-trip up to Sunderland for the evening. Being able to browse records between bands was a treat and Slow Club played some previews of tracks from their forthcoming third album, which shone in spite of Rebecca's self-deprecating banter.

I saw The Chapman Family A LOT this year. This gig was by no means a high point, performance-wise, but it makes my top 10 for other reasons... The gig was part of Liverpool's Sound City Festival and the stage TCF played on was, much to their amusement, sponsored by the Campaign Against Living Miserably. The whole set-up was completely wrong, with tables set out cafe style, resulting in most of the audience sitting through the entire performance. Not wanting to let the side down, this just encouraged Franny and I all the more... we were hugely proud that our efforts warranted a mention in the gig review in the festival programme the following day. 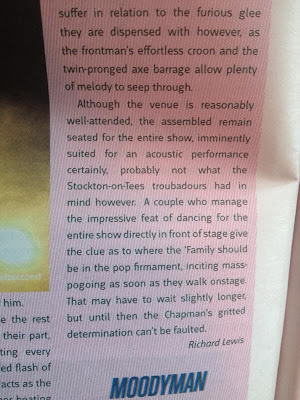 8. Frankie & the Heartstrings - Deaf Institute, Manchester 6/6/13
Frankie and Co. love this venue nearly as much as I do, I reckon. They packed the place out and clearly enjoyed the atmosphere, with Frankie hopping off-stage to sing in the crowd and on the bar. The rock-out finale was fantastic too. This gig also wins the dubious accolade of second-sweatiest gig of the year.

7. Sweet Baboo - Belgrave Music Hall, Leeds 8/11/13
Sweet Baboo was my big festival discovery of the year, although I sort of always knew I would love him as I'd already fallen for his bass/sax/grin/dancing in Slow Club's live band. A proper gig at this ace new Leeds venue was the cheery cherry on the cake.

6. Suede - Rock City, Nottingham 28/3/13
I'd just got back from Japan and, if I'm honest, the last thing I felt like doing was driving to Nottingham to see Suede. But wow... as soon as they came on the stage I was 17 again and giddy with excitement, singing along to Metal Mickey, swooning at Neil Codling and giggling at Brett's ridiculous posturing. We may not have got quite the setlist that Ally Pally did, at this warm-up show, but I'm pretty sure the energy felt by the crowd and band in this more intimate venue couldn't have been matched.

Update: you can now read part 2, counting down from 5 to the top spot!

Oh yeah, I remember, I quite like those Manics boys...

So after their not-quite-two-year hiatus, the Manics are well and truly BACK. All the excitement has inspired me to revisit the last few times I saw them, waaay back in 2011.

First up, in October, was a rather jammy opportunity to see them in the smallest and most legendary venue I could imagine, Night & Day Cafe. It was a radio thing and for once in my life, I was in the right place at the right time and managed to bag a couple of VIP guestlist places. The gig itself was short and atmosphere a bit strange, as these type of things tend to be, full of competition winners and media types. But watching Sean play a box was hilarious and we got a spine-tingling rendition of She Is Suffering. The biggest thrill was running round to the back of the venue like a teenager and gushing, blushing and finally, after a decade of waiting, getting my Everything Live video cover signed. James mock-applauded me 'sticking it to the man', after I explained that security had refused me getting it signed at the HMV Cardiff 'Truth' album launch in 1998! Not content with one meeting in a month, I also went along to the HMV signing of the big pink polaroid book (I'm sure it has a name, but I don't know what it is). There was lots of waiting... ... as well as quite a bit of squealing when my queue-mate discovered a whole paragraph about her in the book's intro text! But it was definitely worth it, for my one and only fan-girl Manics pic (thanks Franny!) :D So by the time we reached December, I had completed my regression to 17-year-old teenybopper extremes of giddiness. Much of the nervous anticipation for the big O2 extravaganza was channeled into customising my gig-dress. I was aiming for the DIY aesthetic but with crowd/beer/pogo-proof durability. I think I managed it, although sitting down proved a risky business. The gig was everything I hoped for and more. Nicky had a few skirt issues... Sean was a drum master. Of course he was. The screens were so hypnotic I sometimes forgot to look at the band on stage. It all ended in a flurry of confetti and tears. Welcome back Manic Street Preachers! We missed ya x

P.S. You can click through the pics to get to the full albums on flickr!
Posted by Jenny at 20:30 0 comments

I really love Saltburn... and not just for the secret knitters who have yarn-bombed the pier... National Pier of the Year 2009 Some bonus pics of the knitting and more, if you are super-keen, on the flickr.
Posted by Jenny at 22:29 0 comments

A rainbow of records...

To celebrate The Chapman Family releasing their latest single on glorious purple vinyl, I was inspired to delve into my 7" collection and pick out some of my prettiest coloured records to share with you. My favourite is definitely the sparkly 'Sparkle'! Think I may have to do a follow up post of patterned/picture discs sometime too...

Pre-order a signed copy of The Chapman Family's This One's For Love on purple vinyl at Sound It Out or check the band's Facebook page for other options :)

Jenny
Salford, England, United Kingdom
This blog is by Jenny, who lives in Salford and likes to take pictures, usually quite bad but occasionally good.